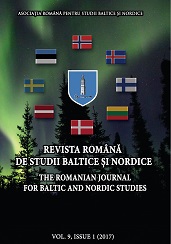 Summary/Abstract: The study refers to the approaches of the Transylvanian issue expressed by the Swede Gustav Bolinder in a “Svensk Tidskrift” article, volume XXXI, no. 9 of 1944. The Armistice Agreement between Romania and the United Nations, signed on September 12/13, 1944, admitted that Transylvania or most of this province to be reassigned to Romania. Suddenly, the Transylvanian issue had become one of the headlines in the world. Gustaf Bolinder, who had traveled in Romania in 1943, supported the Romanian rights in a book and press articles, both in Swedish (the article referred to in this paper dates from Autumn 1944). Another Swede, namely Arvid Fredborg, wrote comments that mostly criticized Bolinder’s approaches. Bolinder’s views and Fredborg’s comments were dispatched by the USA Legation in Sweden to the State Department, in Washington DC, and studied by the author at the Central National Historical Archives of Romania, within the USA Microfilm Collection. As the Armistice Agreement between Hungary and the United Nations, signed on January 20, 1945, forbade any Hungarian claims on Transylvania only two choices remained: an independent Transylvania, an unrealizable project according to the United Nations but present in the international media, or its reintegration into Romania. The author considers that Bolinder’s synthesis mastered, among non-Romanians and non-Hungarians, the truth about Transylvanian interethnic relations at the end of World War II.