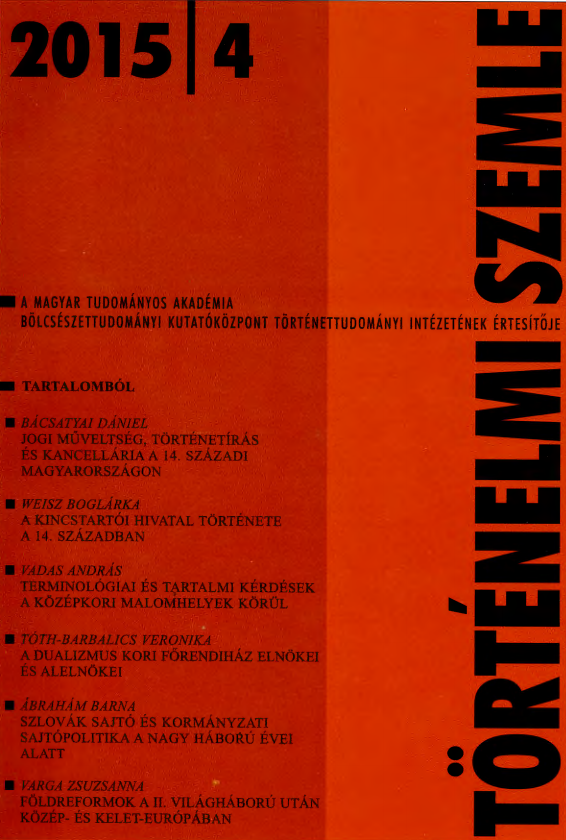 Ki volt az első kincstartó? A kincstartói hivatal története a 14. században
Who Was the First Treasurer? The History of the Treasurer’s Office in the 14th-Century

Summary/Abstract: The first incumbent of the treasurer’s office in the Kingdom of Hungary, which appeared in the 14th century, is generally regarded by the relevant scholarship to have been Pál Magyar, whom king Charles I called his treasurer (thesaurarius noster) for the first time in 1340. The emergence of the treasurer’s office itself has traditionally been explained by an increase in the competences of the magister tavarnicorum, which would have made it necessary to create another office to which the financial functions previously performed by the former could be delegated. Others, on the other hand, opine that the treasurer’s office only appeared during the reign of Louis I. In fact, treasurers connected to the king (thesaurarius) appear from the 1320s in the charters. On the basis of information from the Angevin period, it is clear that the basic functions of the treasurers consisted in the administration of charters regarding the royal estates and of the gifts (munera) due to the ruler. Both functions suggest that the treasurer supervised the personal wealth of the king, and probably guarded the precious objects kept in the royal treasury, while also exerting control over the financial affairs of the court. The function of supervising the royal archives was taken by the treasurer from the custos of Fehérvár. As the competences of the treasurer did not involve the direction of economic policies, the office did not become a baronial dignity – and was consequently omitted from the series dignitatum of royal charters –, but it was nonetheless a confidential position. What the magister tavarnicorum seems indeed to have lost under the Angevins from his former economic role must have been the supervision over the tárnoks, and thus the royal estates, a function which was transferred to the so-called maior tavarnicorum. It was the administrative part in the government of the royal estates which were assumed by the treasurer.