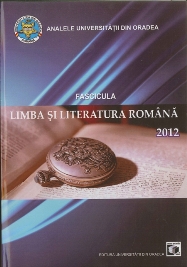 Summary/Abstract: It is precisely within the paradigm proposed by Winterson as it emerges in the Motto above (i.e., inter alia, the decrepitude and unreliability of time as regards precision) that this paper operates in that it sets out to investigate the role of memory, or perceived history vs. ‘real’ history, indeed of what I term ‘micro-history’ – in this case, Henri the Cook’s diary-like rendering of historical turmoil, namely Napoleon Bonaparte’s campaigns. It is a marginal, peripheral position – or rather, as the text proves, a vantage point – that Henri takes in his narrative endeavour, the position of a servant, an apprentice Cook in the Emperor’s Palace and then makeshift war quarters. The paraphernalia of power – the power of military conquest on the one hand (see Napoleon’s weapons) and the power to create hedonism by cooking (see the chef’s kitchen utensils and spices) are used masterfully in the novel in a quietly choreographed battle of paradigms. There is a time for conquest, for imperial expansion, there is also a time for indulging in hedonism; Napoleon experiences both and our protagonist, Henri catches glimpses thereof during his employment at Court. And the choice of culinary ground is not an arbitrary one, as it is bound to yield the intimate rhythms of everyday life – the regularity of cooking and of the subsequent meals – rhythms that are a rather obscure / d part of history. As for ‘real’ history, or grand history – the kind of history re-traceable in canonical history books, Winterson has in this novel an idiosyncratic stance: “Winterson says that “The Passion” focuses on a moment of invented history.” (Noakes and Reynolds, eds 2003). Not only is it ‘a moment’ we are dealing with, which is for a start redolent of a metonymic relation to history ( a part – i.e. a moment - standing for a whole – i.e. time), but also this is ‘invented history’, hence a double remoteness from ‘real’ history. Equally saliently, the novel is set in an age when empires were possible, hardly possible anymore nowadays, in the postcolonial era; on a micro-historical level, it is organized around the personal growth of a young man in his formative years, hence a time for individual becoming is instantiated