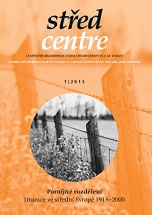 Summary/Abstract: The author analyses professional geographical narratives centered upon the borders in East Central and Southeast Europe in the context of the First World War. It is argued that they represent a regional equivalent of nationalistic mobilization of intellectuals’ characteristic for Western Europe and broadly referred to as ‘spiritual war’ (Krieg der Geister). Typically, they tended to employ the newest methodological trends (notably anthropogeography) together with inspirations from the tradition of national characterology (or ethnopsychology). They also participated in the international discussions on the question of ‘natural’ borders. The main fronts of ‘the war of maps’ spread mostly around territorial claims in the region: the German expansion to the East, the conflict between Bulgaria and Serbia in Macedonia, the Polish-Ukrainian border conflict, hostilities between Italy and Serbia etc. The expertise of the East Central and Southeast European geographers was, then, instrumental for the reshaping of the region following the decisions of the Peace Conference. Finally, professional techniques and modes of argumentation used by the region’s geographers inspired interwar revisionist campaigns in Hungary and Germany.