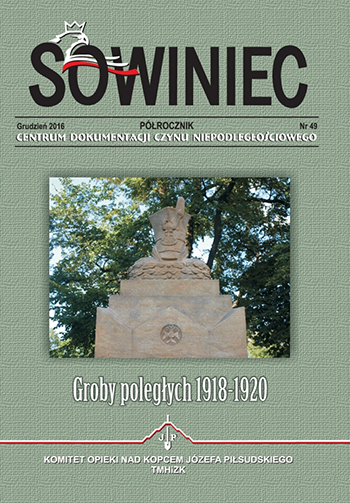 Summary/Abstract: After nearly a hundred years since the struggles waged in the years 1918-1920 on the eastern border of the reborn Republic of Poland, many graves and war cemeteries – a testimony of these events – have disappeared forever. Many of those who gave their lives to their homeland have been forgotten. The article attempts to indicate locations the area of the Małopolskie voivodship where one can find graves of those who died during the above period and a list of basic information about the persons buried there. The first part of the study presents approx. 40 places – war burial sites and graves (single and collective) – based on data published on websites run by the Małopolska Provincial Office in Kraków. The second part contains information about the few fallen in the province who could be identified and are buried in family graves. Two war cemeteries are also indicated (located in Nowy Sącz and Nowy Targ), whose original boundaries (and with them burial sites of soldiers) were irretrievably destroyed. The soldiers of the Polish Army buried there died in military hospitals due to diseases and wounds. The preserved space, however, leaves room for their commemoration.