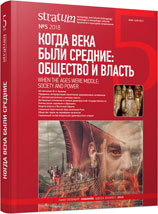 Summary/Abstract: The article advances a new approach to the political competition of the Rurik dynasty for the influence on Volhynia and Galicia in the 11 th century. The research is based on the “mixed sources” logic and deals with the reconstruction of social and political structures through the archaeological evidences, imagology of power, and historical geography. The re-appraisal of the information of the Primary Rus’ Chronicle is also proposed. The decisions on the hereditary possession adopted by Liubech Congress in 1097 AD dealt only with the Rus’ Land in the Middle Dnieper area that played the role of colonial metropolis to other territories. Other princes fought for the rights to control administrative centers on the main commercial routes that gave them the right to be members of the “union of archontes”– the political structure imposed on Eastern Europe by Byzantine Empire in the treaties of the 10 th century — and to “have a part” (prichastie) in political life of the Rus’ Land. This status reflected the idea of local élites about the social prestige and structured the model of power linked to the Byzantine hierarchy. Only later this structure took the form of clannish sovereignty of the Rus’ Land. This system of power cannot be compared to the European corpus fratrum. The analysis of written sources testifies to the existence of the archaic system of political power in the 11 th century Rus’, with domination of values inherited from the previous period. Its economy continued to be based on the control over transcontinental trade.