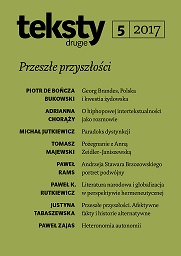 Summary/Abstract: Żaglewski outlines the most important examples of Polish comic texts with a focus on superheroes. Using an approach based on media comparative studies, he examines common and individual aspects of comic series from the US and Poland. The main goal is to define the Polish superhero monomyth as a local version of the American monomyth, which is strongly codified both in terms of theme and ideology, and which serves as a foundation for superhero stories. This allows Żaglewski to distinguish subversive and affirmative Polish variations of Western superheroic tales.