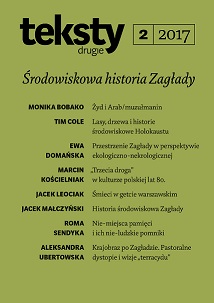 Summary/Abstract: Kolarzowa examines the formation of the ‘discourse of normality’ around the Holocaust and its material consequences. She points to the relationship between anti-Semitism and the construction of a new national identity in Poland, as well as the ideological blurring of actual social structures. The intensive operation of ‘enlightening the people’ (1920-1939) is presented as an immediate source of positions regarding the Holocaust, as this operation was marked by aggressive nationalism, which was legitimized using religion. Kolarzowa suggests that the brutality and dehumanization that Jews experienced in rural communities could have been a form of abreaction, a discharge related to the oppression of serfdom and a transferred form of retaliation. The Jew then became a phantasm of the lord; violence towards Jews – an accessible object – became a substitute for violence towards social sovereigns – a forbidden object. As a consequence, notions were internalized about the right to succession: to inherit the property of those who were put to death and to transfer the subjective position in such a way that the people who took over the Jewish patrimony could view themselves as victims of (potential) claims.