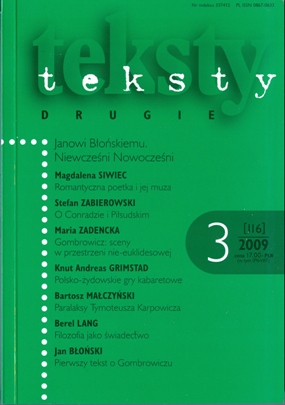 Summary/Abstract: The aim of this article is to present the parallels between two well-known figures, the men who were born on the borderlands of nineteenth-century Poland. One of them was an eminent Polish politician, Józef Piłsudski, and the other, a distinguished English writer – Joseph Conrad. Both of them had several things in common, for example: they had been born into landed-gentry families (the so-called ‘szlachta’); they were raised in a patriotic atmosphere within the shadow cast by national tragedy of the 1863 Uprising; they assimilated the cult of Polish romantic literature. However, later, their lives differed. Conrad did not believe in a reconstruction of independent Poland. Piłsudski, on the other hand, was the one who substantiated the restoration of the Polish state. Having achieved that, he gained the writer’s respect – whereas the politician became a great admirer of the author of Lord Jim.