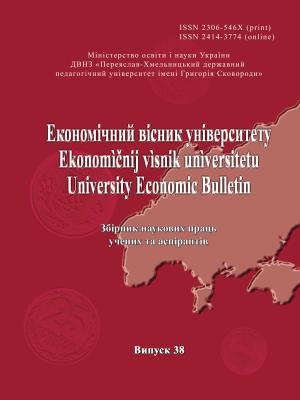 Summary/Abstract: The general objective: identifying the mechanisms of managing by objectives processes of modernization on the part of the state using an implementation of certain rules, procedures and action standards for subjects of modernization. Implementation of the objective implies solving the following tasks: performing analysis as a basis for synthesis of the problematic situation of modernization in the main areas of society in the period of post-crisis development; systemizing main characteristics of activation of processes of modernization in the domestic economy; studying influence of external factors of Ukraine’s open economy on processes of modernization. The object of the research is a socio-economic sphere of Ukraine. The subject of the research includes mechanisms and relationships which facilitate the performing of modernization of Ukrainian society in the period of post-crisis economic development. Theoretical and methodological basis of work is an analytical and systematic approach to the study of the object of research. Methods of research. Theoretical and empirical methods of scientific knowledge: historical and logical, statistical, induction and deduction, comparative analysis, abstraction and aggregation of the main principles of economics. Results of work. The purpose and consequences of the modernization of Ukraine's economy are defined, a concept of «modernization of economy» is refined, the basic trends and the directions modernization of the national economy are considered. Conclusions. The successful modernization of a country is the guaranty of its dynamic and democratic development. The strategic purpose of economic development of Ukraine is its joining in the group of developing countries.