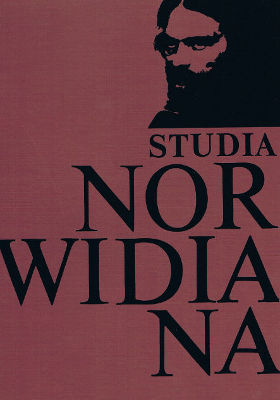 Summary/Abstract: The study sketches in a general way the problem of language in Norwid's comedies. The concept of language is understood here very broadly and goes far beyond purely linguistic categories. The article discusses a number of selected issues. The first set of problems is connected with showing characters in Norwid's comedies by giving them their own kind of speech, by introducing comical “sayings” and a sort of refrains in conversations. Through characters' language Norwid assesses the 19th-century society, but also he leads the reader to much broader approaches connected with the civilization, social and cultural perspective. Another issue concerns the connection between language and the theatrical vision. It is first of all about commencement of conflicts in the dialogue, relating events, but also about analyzing the author's language as detached from the “speaking subjects”, and also about comparing Norwid's plays with the drama of the time.In the article it is pointed that in contemporary small dramas, close to the poetics of realism, Norwid concentrates on great issues of civilization. He subjects all his theatrical conception to this problem. Hence the problem appears not only in the situational dialogue, but also in the descriptive dialogue, and even in marginal texts (ones that serve showing characters' gestures and movements). Norwid's comedy differs from its Polish counterparts in richness of problems and in the synthetic assumption leading towards synthetic means of expression. Norwid finds them in the gnome, metaphor, poetical image, lyrical poem, and apart from this in extra-verbal means of expression – gesture, mime, intonation. He also differs from other dramatists in his own original conception of realism that comedy in Poland does not yet have. Norwid's theatre develops towards ever more intensive selection of words, subtle shades, calming down the pathos, and colorless informality that becomes important with parabolization of “specks”.