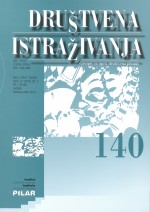 Summary/Abstract: Our study focuses on examining the relationship between productivity (or productivity growth) and state aid allocation in Slovenia during the period of 1998 to 2012. The country itself represents almost an ideal case as the amount of subsidies being allocated in the relevant period decreased significantly after joining the EU. Our study builds on the theoretical model of Aghion et al. (2015) arguing that sectorial policy can enhance growth and efficiency if it is made competition-friendly. The main results show, that by increasing dispersion of subsidies within particular sectors by one standard deviation, the productivity growth increases by 0.03 percentage points on average, ceteris paribus. State aid has been especially important in the period of economic downturn (2009–2012). However we found evidence that firms receiving a higher portion of subsidies were less productive when compared with counterparts from the same sector receiving less or no subsidies. The difference was the biggest during the period of economic downturn.