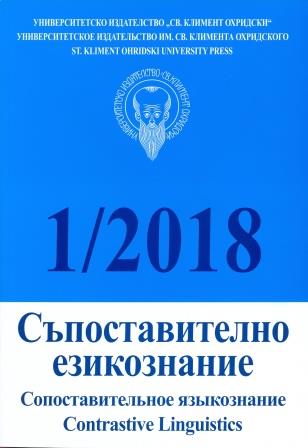 Summary/Abstract: The third and final part of the series on specificity summarizes the findings on the semantics and functions of indefinite specific and non-specific noun phrases in Bulgarian and other European languages such as English, French and German, which have a definite article. Speakers express their reference to real-life objects using two types of noun phrases. In linguistic analyses of European languages, these ways of making reference are described and differentiated at a theoretical level. From a communicative standpoint, however, non-specific NPs are difficult to differentiate due to their use of the same article (indefinite) and the same term (non-specific). Like in other European languages, non-specific phrases in Bulgarian are semantically diverse. This diversity is expressed in Bulgarian not only through the indefinite article, but also by using certain determiners. As used in Bulgarian linguistics, however, the term non-specificity encompasses only one of the meanings distinguished in other European languages. This restricted interpretation of the term differs from its use in the international linguistics literature and does not reflect the semantic diversity found in spoken communication.