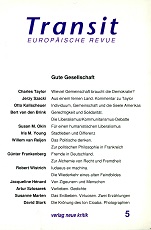 Summary/Abstract: From a philosophical and political perspective, the society of the capitalist welfare state is often criticized beacuse of its atomistic and depoliticized character, that it favors a pluralism of selfish interest groups and bureaucratic rule. As an alternative vision, an ideal of community is usually suggested. Appealing to the community as an alternative to liberal individualism, as found in Michael Sandel, Alasdair Maclntyre and others, has in recent years spurred debate on the merits and shortcomings of communitarianism as an antipode to liberalism. Many authors who represent socialist, anarchist or feminist positions or criticize the capitalist welfare state for other motives formulate their ideas of a society free of domination and repression in the sense of a common ideal. Much of this discussion gives the impression that the alternative of liberal individualism / communitarianism completely covers the field of possible conceptions of social relationships.