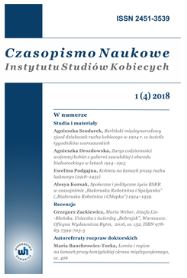 Summary/Abstract: The purpose of this work is to present the hierarchy and the functions of female deities in the Germanic and Hindu pantheons. The most important in Germanic mythology were the divisions into the symbolic masculine and feminine strengths, unlike the model gods and humans separation basing on three areas: power, war and prosperity. Among several female deities of Germanic mythology, ones that shall be listed are: Frigg, the Queen of the Æsir and Asgard, Sága, Eir, Gefjon, Fulla, Sif, Lofn, Vör, Vanr, Syn, Hlín, Snotra and Gná as well as belonging to the Vanir, Nerthus and Freyja. The war between the Æsir and the Vanir, causes Gullveig, a mysterious woman, to appear. From all of the Norse goddesses groups, distinctively separate from the masculine fraction of the pantheon were the dísir, goddesses connected with the fertility and the death. The tradition of Mother Goddess in Hinduism is just as important as the traditions of Vishnu and Shiva. Innumerable female deities in the local traditions are usually regarded by Hindus people as the personifications or some aspect derived from one and only Mother Goddess, the worship of whom, most likely dates back to prehistoric times. In Hinduism, all of the goddesses are just some kind of One Goddess’ aspect, who depending on the specific situation, acts in a different manner. The most important goddesses are Durga and Kali. What is also popular in above-mentioned religion, are relationships among the couples of Gods that are to be the examples of an ideal relationship between a woman and a man. These include relationships of Rama and Sita, Kriszna and Radha, Shiva and Parvati or Vishnu and Lakshmi.