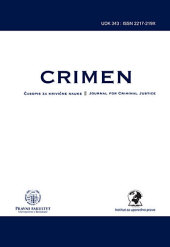 Summary/Abstract: Analysis of juvenile crime in this article is based on the data of reported and convicted juveniles. It can be concluded that the state of crime of this category of offenders is not dramatic, considering that it does not show a tendency of rapid growth (the only exception is the second largest city in the Republic – Novi Sad). The number of reported offenders ranges for more than a decade around 4000, which means that the percent of persons aged 14-18 years in the total number of reported perpetrators of all crimes is about 4% – in other words, their crime rate is about 55. Territorial distribution shows that more perpetrators are registered in the south than in the north part of the Republic. However, some data of the structure of juvenile crimes and of their personal traits do not favor the mentioned calming conclusion. In the structure of crimes committed by persons aged 14-18 years for decades have dominated property crimes. However, participation of these crimes has declined in past years, while crimes against life and limb have recorded a notable increase, that has stabilized in recent years at around 10%. Rapid growth is visible at the offenses against public order and legal transactions, as well as at the criminal offenses against public health (related to drug abuse).