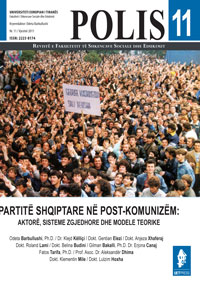 Yll i partisë, yll i mediave: Rasti i ngritjes mediatike të Edi Ramës
Edi Rama, the case of a media-driven politician in Albania: The implications for political parties

Summary/Abstract: Since the first years of the democratic transition and in the later period of consolidation, media and politics in Albania have faced dramatic challenges and transformations. The relation between the two raises many concerns for the course of post-communist transition. However, no special attention has been given to the role of the media in this area and few researchers have attempted to map out the degree of intrusion of media into the political domain under such conditions. By examining the case of Edi Rama, former Mayor of Tirana and actual Chairman of the Socialist Party as the first fully ‘media-crat’ who performs his style-politics through media in post-communist Albania, this paper endeavors to map out the role of the media regarding both the personalization and the ‘mediatization’ of politics in the special context of a young and developing democracy. Edi Rama represents one of the most significant examples in this regard. By and large, it indicates the growing intrusion of media into the political domain. Accordingly, this paper will argue that the media could significantly shape the course of Rama political rise and the consolidation of his stature in the Albanian political arena, with significant implications for political parties in the context of a new democracy. A former painter and artist, Rama used to be in fact the challenger of power-holders and the ardent critic of political parties in Albania. He belonged to the group of intellectuals who, after the fall of communist dictatorship, came to define themselves against political parties and politicians. Such an anti-political project which was to some extent discursively construed in the media arena, was picked-up and developed more closely by Edi Rama, while would finally penetrate the political process as a pure political act. This paper provides a short literature review of media politics approaches, underlining the role of the media in shaping the course of political processes, especially in post-communist countries. Its focus is on the mediatization process of the profile of Edi Rama as a celebrity politician in the period between 1998 and 2008. When considering such recent developments in new democracies, we endorse a critical position, suggesting that ‘unregulated media and political communication in newly democratizing contexts may actually be more disruptive than productive in the formation of stable institutions and patterns of citizen participation’ (Bennett, 1998). Critical scholars assert that democracy requires social networks and political filtering organizations (whether parties, unions, or other social institutions) to anchor and deliberate about the political communication received from suddenly distant and noisy channels.