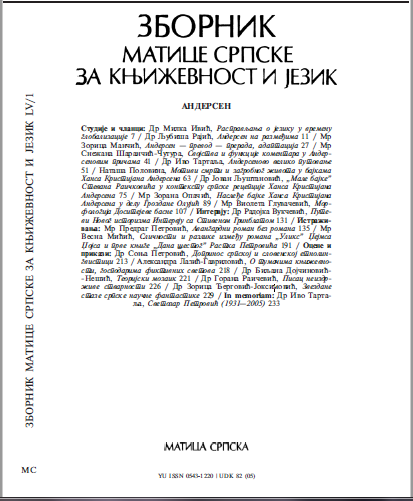 Summary/Abstract: Although they contain the genre determination fairy tale, Stevan Raickovic’s Male Bajke (Short Fairy Tales) do not follow the patterns of narration related to the oral fairy tale. This paper tries to prove the assumption that Raickovic’s book takes over and transposes some narrative models from the fairy tales and stories of Hans Christian Andersen. Moreover, the paper also proves that Andersen’s fairy tales and stories, in spite of the relatively early and significant popularity among the Serbian readers, did to manage to create significant reflections in the Serbian literature before Male Bajke. Explanation is sought in the relation to the folklore models of narration, in the influence of the current literary-historical and social processes, as well as in the bourgeois image of the world in Andersen and in the Serbian 19th century culture. Furthermore, the paper shows that the reception horizon formed in such way persevered in the 20th century, points out the relation of Male Bajke to it, the modes and range of possible Andersen’s influence on Male Bajke, as well as the forms of Raickovic’s transposition of impulses from Andersen’s work.