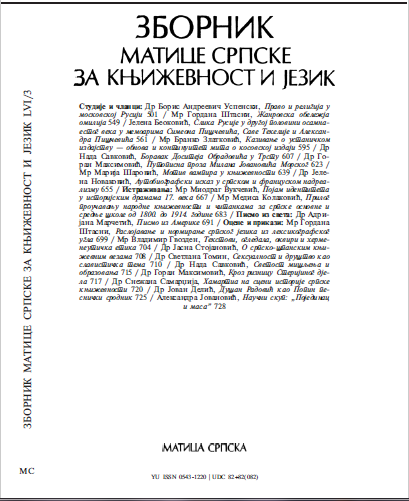 Summary/Abstract: Various kinds of betrayal represent serious offences, and the most drastic ones are those that threaten the happiness and survival of a community or an entire nation. This paper singles out the stories discusing the cases of betrayal and dishonourable conduct of the contemporaries of The First Serbian Uprising (1804—1813). The notion of betrayal in this period of Serbian history, viewed from a specific written and oral narrative angle, is expressed in diverse forms, from fear of betrayal, through sporadic and individual cases of obstruction of the rebellius fighting, to the accusations related to decisive national disasters. However, on the basis of the oustanding selected narrative examples one can conclude that the phenomenon of betrayal in an uprising is nor experienced as a specific and autochthonous case, but is interpreted as a consequence of the curse of the Serbian betrayal in Kosovo which entered the Serbian nation from then and which has just been revived from time to time and made current in new and contemporary historical circumstances.