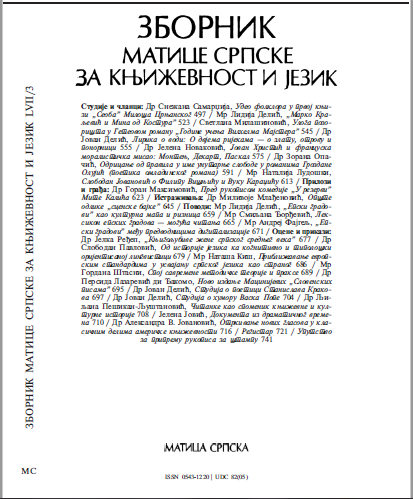 Summary/Abstract: Although he is, as a rule, viewed outside the trends of the Serbian literature which received their specific mark through the relations with oral heritage, Miloš Crnjanski, too, established a creative dialogue with the „simple forms”. Careful study of the second book of Migrations (Seobe) confirmed the ties with Vuk’s Dictionary and proverbs, as well as with a series of age-long beliefs taken from the deepest layers of tradition. This paper follows the folklore elements, scattered in the cyclic structure of the first book of Migrations which the writer stylized in different ways, sometimes hiding them skillfully, even when he gave them precedence over the destiny of the hero and the nation. Analyses point to the „status” of oral epic, different types of epic stylization, to the functioning of fantasy and description which originate in tradition, to the role of traditions and beliefs in the structuring of the portraits, the relation between the main characters and the collective. The paper highlighted artistic techniques with which Crnjanski revived almost all factors of folklore heritage, from the memory related to history and the sound of songs, through faith and beliefs, stories and short forms, to symbols and rituals. Miloš Crnjanski did not reject folk tradition, but complemented the continuity of Serbian literature with his work.