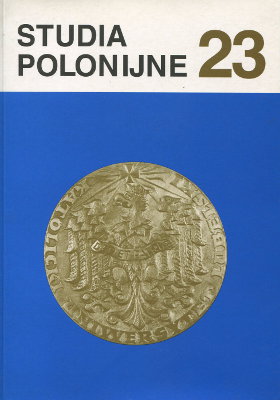 Summary/Abstract: The paper is based on an analysis of the people addresses for the World Days of the Migrant of the years 1989-2000. In the light of John Paul II's teaching the situation of migrants has a lot in common with the situation of the Church, of the “people on the move”. The pope devotes much attention to the processes of integration between migrants, representing various religions, with the recipient societies. Adherence to a religious community helps migrants in preserving their own identity, but the course of integration processes depends also on the dominating religion in the recipient societies. A separate question is the issue of social stratification and legal aspects of migration. The pope points to numerous manifestations of disproportion among immigrants in the social, economic, and legal dimensions, demanding at the same time that the causes of this situations be done away with. The situation of the family on he move and of the woman has become for John Paul II a topic of two separate addresses. In this context, one speaks about problems resulting from social uprootedness and the ways how to overcome it. The final part of the paper deals with causes and consequences of migration, including a moral evaluation of this phenomenon: a negative evaluation of migration entails illegal emigration. The pope is positive about the migration of young people connected with their education, and the migration of people as regards the “uniting of families”.