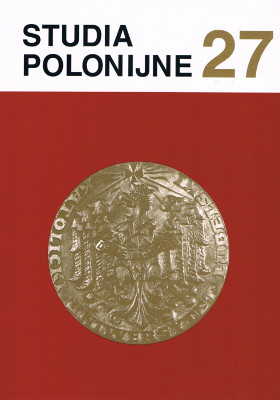 Summary/Abstract: The communist authorities of the Polish People's Republic in the 1970s intensified their activities against Polonia to make it loyal. They had a long-term plan to work on Polonia and assumed acceptance of all sections, Polish milieus abroad from the Polish People's Republic, especially those who disagreed with the Yalta order. The authorities noticed noticed how great was the role of Polish pastoral care abroad. Therefore in their policy toward Polonia they began from the 1970s onwards to take into account the position of the Polish priest abroad, trying to use him for their own political purposes. They held that a considerable part of Polonia would stick to their faith, hence a „respectively balanced religious policy was indispensable for the effective influence on Polonia”. In view of this, the authorities changed their policy toward the clergy who were going abroad and they permitted them to go to work among Polish emigration. The Polish diplomatic posts abroad established a permanent contact with Polish priests and provided support. The PAX association, ChSS, and Polonia Society were also employed to the help. The state plan to work with Polonia ensured more frequent contacts between the religious authorities in the country and the subordinates working among the Polish people abroad. Those trips served, above all, to neutralise pastoral care posts which were openly against the Polish People's Republic. The authorities sought to draw contacts with the Polish episcopate, engage it in state initiatives and limit its „negative influence” on the Polish clergy abroad. Such step were fruitless. Those priests who adopted a negative attitude towards the popular authorities were not allowed to go abroad. Such steps brought about the intended result. The priest who arrived from Poland to work among immigration on whole, according to communists, were loyal toward the Polish People's Republic and made those who were hostile change their attitude. The regime engaged also religious minorities in Poland to work on gaining Polonia for the Polish People's Republic: the evangelical Church, the Evangelical-Augsburg Church, and the Polish-Catholic Church.