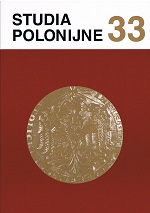 Summary/Abstract: The Communist authorities included pastorate conducted by male orders and congregations for the Polish community abroad in the domain of political actions against the Catholic Church in Poland. In the first years after the Second World War the Communists, who wanted to keep appearances of good relations with the Church, allowed monks to go abroad and work in Polish communities there. Their approach to this issue changed in the Stalinist times, when they were more interested in reemigration of Poles to Poland than in Polish clergy going abroad. Such an approach presented by the Warsaw authorities resulted in dissatisfaction among Poles living abroad. A lack of Polish priests in the emigration centers resulted in priests of other nationalities taking over Polish parishes. Requests and petitions for priests from Poland filed by various Polish organizations to the Polish authorities had no effect. They were simply ignored. At the beginning of the 1960s the situation changed; the authorities agreed to allow monks to leave, however, under some strictly defined conditions; permits to leave depended on meeting these conditions. It was only in the 1970s and 1980s that the Communists’ policies towards Polish pastorate abroad changed completely. The Warsaw authorities, realizing the aversion most members of Polish communities abroad had to the Polish People’s Republic, tried to use monks going abroad for their own goals and aspirations. This is why they were monitored by diplomatic posts abroad, seminars were organized for monks leaving Poland to work with Poles abroad, and meetings were arranged in Wilanów for those who came to Poland to spend their holidays here. Going abroad to work there was not hindered, and in certain situations some congregations were even encouraged to send their monks to conduct pastorate in Polish communities. Also the security services were interested in the involvement of religious orders in Polish pastorate abroad.