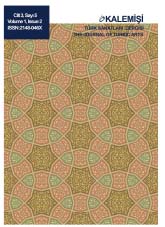 Summary/Abstract: Ormana is a country under the governance of İbradi province, Antalya. The settlement which is located on Toros Mountains with a steeply and stony geography is one of the significant samples of Mediterranean architecture known for its constructions built with conventional materials, technics and methods. The houses dubbed as ‘buttoned house’ has been categorized within Akseki-İbradi group. The households in Ormana are generally designed and built two stored including basement and first floor. Traditional households mostly share common characteristics and follow each other on subjects such as function, outline of plan and organization of residence. Intensive labor power used to build mansions is not applied to build plain and simple public apartments. The most encountered construction method in the area is the common construction technic. The method, traditionally called as ‘wall with pistuvan or wall with hatil’ is extremely simple but functional based on strengthening the walls that built without concrete through wooden ‘hatil’. The reason for this technic is that Ormana and its periphery is deprived of lime sources geologically. The archaic knowledge of this architectural style, using these domestic materials as a crucial part of construction, without a doubt, is a part of our cultural legacy. Intangible cultural heritage (ICH) is defined by UNESCO as practices, representations, expressions, information, skills and other parts of these such as tools, equipment and cultural places belonging to certain communities, groups and in some cases to individuals. An article written according to information obtained through field work in the area, in 2013, embodies the architectural style peculiar to area, architectural terminology, knowledge of construction and construction traditions in context of folklore by definition and analysis.