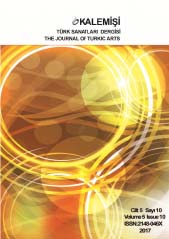 Summary/Abstract: 27 copper coins belonging to the Sinjar Zengid Atabegship were detected in the research we carried out in the Museum of Mardin. 6 of the coins were minted in the era of the 2nd Imadeddin Zengid and 21 of them were minted during the reign of his son Kutbeddin Muhammed. The name and titles of the atabeg who got the coin minted was found on the front and back side of the coin as well as the place and date of minting and the name of el-Nâsir lil-dîn, the khalifa of the era. The name and nickname of Ayyûbid overlord el-Adil Seyfeddin Ebu Bekr was written on one of Kutbeddin Muhammed’s coins.The examined coins were classified in two groups as coins with writings and coins with figures. Coins in the coins with writings groups have geometric forms placed on their front and back sides. As for coins with figures, we see that the 2nd Imadeddin Zengid and his son Kutbeddin Muhammed maintained the tradition of the double headed eagle of the ancient Turkish mythology. Most of the coins with figures of Kutbeddin Muhammed involve busts like that of Constantinople who was known to be the protector of the city in Roman Empire. All of the coins with writings and figures were written with cufic calligraphy and elements like floral ornaments and Zengid stamp were placed between writings.