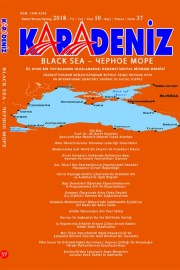 Summary/Abstract: In this article, a copper coin registered in the inventory of the Museum of Anatolian Civilizations and got minted by Salah Ad-Din Ayyub (Salahaddin) in Nusaybin in the year of 578 (1183) was examined. On the front side of the coin, there is a bust dressed in the Byzantine clothes and wearing a Sassanian style king’s crown with three tips. The bust has a round face, slanted almond eyes and Seljukian facial features. An inscription on the back side of the coin draws attention. In this inscription, Salah Ad-Din used an assertive title which is “Yusuf Ibn Ayyub Muhyi devlete Amir al Mu-minin”. This expression which means “the one who maintains the State of Islam” was given personally to Salah Ad-Din by the Abbasid caliph Al-Mustad in the year of 566 (1170) when he dethroned the Fatimid caliph al-Azad. As a result of the research, it was concluded that the use of the Sassanian and Byzantine kings’ style coins did not begin with Salah Ad-Din Ayyub and that Arabs and Artuqid Turkomens used particularly Roman and Byzantine style coins for many years. When all findings are set forth, it was concluded that this coin is a rare example and the value of the coin rose even more.