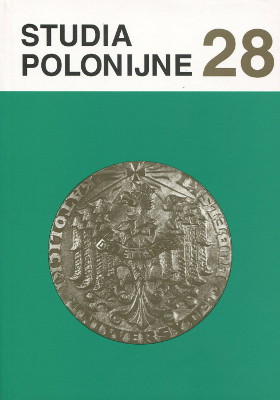 Summary/Abstract: The Missionary Society (MS) was the first national society in Poland designed for the clergy and the lay advocates of mission. It was modelled on the missionary organisations in Moravia and in West Europe. The MS was inaugurated on 14th December 1921 and then confirmed by the State on 8th February 1922. In November 1922 the organisation was renamed to the Polish Missionary Society, and in April 1926 the word „Polish” was changed into „Catholic.” The main originators and organisers of the Society grouped, above all, the Mohylew archbishop Edward Ropp, who stayed abroad in Poland at the time, his close collaborator Rev. Antoni Około-Kułak, and the editor-in-chief of the „Przegląd Powszechny” Fr. Jan Urban TJ. The MS board of directors was the Main Council whose chairperson was Primate E. Dalbor, the Executive Board, with Abp E. Ropp at the lead, and an Audit Committee. The territorial organisation of the MS made a network of parochial circles and diocesan councils which were soon established in many dioceses of Poland. The main purpose of the MS was to support actions on behalf of propagating and strengthening the Catholic faith in the Eastern borderlands and in the Slavic countries. The project-makers of the missions in Russia treated Poland as their priority because of its geographic proximity and historical ties. Moreover, the majority of Catholics in the east was made up of Poles. The MS carried out its goal through prayer and collection of means for the constructions, repairs, and provision of temples and missionary posts; the propagation of the missionary idea in the East; publication of literature and papers. The MS subsidised the Jesuit mission in Albertine, the Missionary Institute in Lublin (1924-1934), which prepared missionaries for the East; supported the theological seminary in Buczacz and Vladyvostok. After Pope Pius XI published his missionary encyclical Rerum Ecclesiae Gestarum on 28th February 1926, the missionary idea of the Catholic Church could be carried out only by three global papal organisations: The Work of Propagation of Sacred Faith, the Work of Jesus' Childhood, and the St. Peter Klawer Society. The Society embraced all missionary territories. The MS retained its specific character, that is it was directed at the Slavic East, which was one of the reasons why it was excluded from the main line of the missionary apostolate in Poland. It was followed by disappearance or, more often, reorganisation of the MS circles into the circles of papal missionary works. Thus the MS was deprived of necessary means to fulfil its tasks and, after a few years of vegetation, was liquidated in December 1931. Despite a short period of existence, it did play a role in making Polish society aware of the missions' needs by informing people about the situation of the Church and Poles behind the eastern border.

"Czy masz ty serce Polaka?" Polacy w życiu metropolity Edwarda Roppa "Do You Have a Polish Heart?" Poles in the Life of the Metropolitan Edward Ropp 2008 Ludność polska na Podolu wobec kolektywizacji wsi The Attitude of the Polish Population in Podolia Towards Collective farming 2011 Zaangażowanie Kościoła katolickiego w proces pojednania polsko-ukraińskiego w latach 1989-2012 The Commitment of the Catholic Church in the Process of the Polish Ukrainian Reconciliation in the Years 1989-2012 (Sum.) 2013 „Głosem narodu przemawia Bóg”. Retoryka religijna eurorewolucji na Ukrainie 2013/2014 “God Speaks through the Voice of the People”. The Religious Rhetoric of the Eurorevolution in Ukraine 2013/2014 2014 Decommunisation of the Public Space in Post–Euromaidan Ukraine Decommunisation of the Public Space in Post–Euromaidan Ukraine 2016
2021 © CEEOL. ALL Rights Reserved. Privacy Policy | Terms & Conditions of use
ICB - InterConsult Bulgaria ver.1.5.1217