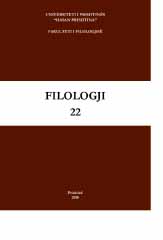 Summary/Abstract: The piece celebrates the extraordinary Canadian-born scholar of Albanian studies, who lived mostly in Germany, Robert Elsie (1950-2017), who published over 60 books and countless article in Europe, America, and elsewhere. A highly gifted linguist (besides English, he had an excellent command of Albanian, French, and German languages), he was a translator of the national Albanian epic poem, Gjergj Fishta’s Lahuta e Malcís (The Highland Lute), a poem in excess of 15.000 verses, which he dubbed the first Albanian contribution to world literature, as well as many other Albanian books of fiction and poetry. He published reference books in English on Albania and Kosovo, a seminal History of Albanian Literature, a Biographical Dictionary of Albanian History, as well as books in German and Albanian. The scope of his interest in Albanian matters ranged from language to literature, from history to anthropology, from common law to myths, and, further afield in the last decade, to photography. A free-lancer, even though his advanced studies in linguistics in Canada and Europe (Germany, France, Ireland) would have prepared him for a distinguished career in academia, Dr. Robert Elsie earned his living as a translator/interpreter, while pursuing his scholarly interests in his spare time. His early death marks the end of a virtual one-man Institute of Albanian Studies he embodied with his varied interests and remarkable achievements in the study of Albanians, a small ancient nation with a difficult and curious history of being part of formidable Roman, Byzantine and Ottoman empires, as well as Yugoslav/Serbian occupation (Kosovo) and Communist rule (Albania) before both Albania and Kosovo eventually emerging as free and independent countries.Dr. Elsie’s oeuvre won him accolades in Albania and Kosovo, but also internationally. President Ibrahim Rugova of Kosovo and President Bujar Nishani of Albania granted him presidential medals of merit for his outstanding work in the field of Albanians studies and for his championing of the cause freedom and independence for Kosovo and democracy for Albania. From 2000, Robert Elsie was a fellow of the Kosovo Academy of Sciences and Arts.