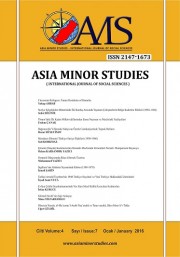 Summary/Abstract: After the World War II, throughout the Cold War period between the USA and the Soviet Union, Syria got closer to the Soviet Union; thus, the USA stirred controversy with Soviet Union and so did Turkey with Syria for the same reason. However, the Middle East has most suffered from the conflict between those two super powers (the USA and Russia) of the world. In this study, a general evaluation of Turkey’s Middle East policies—when the Democrat Party was in power—has been done according to archive documents and the most important strides about foreign policies of the period have been addressed and discussed.