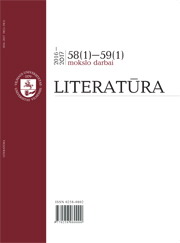 Summary/Abstract: This article discusses the origins and transformation of the idea of the absurd in the modern secularized world. Submitted for consideration is the Latin locution “credo quia absurdum,” a saying ascribed to Tertullian, and how this locution was implicated in the evolution of the idea of the absurd and reflected in literature and art. Examined in the paper are the modifications caused by existential and social changes as well as the interaction of both objective and subjective factors. Using sociohistorical arguments, the author begins to polemicize with the absurdity-suggestive deduction considering the emptiness of existence and the absence of God as somewhat absolute facts. Regarding the reflection of absurdity in Lithuanian culture, the context of religious existentialism, represented by such works as Jobo drama (The Drama of Job) by A. Maceina and Žmogus be Dievo (Man without God) by J. Girnius, was of significant importance. The abovementioned works stimulated a deeper and more authentic artistic insight into the problem. In the panorama of Lithuanian literature of the 20th century, signs of absurdity can be seen in the works of classical (V. Mykolaitis-Putinas, B. Sruoga, H. Radauskas, M. Martinaitis), avantgarde (P. Morkūnas, S. Šemetys) and postmodern (M. Ivaškevičius, S. Parulskis, G. Grajauskas) authors. The performances of A. Ambrasas, which were staged at the Institute of Art in the late sixties, stand out as a distinguishing and methodically framed phenomenon of the theatre of the absurd.