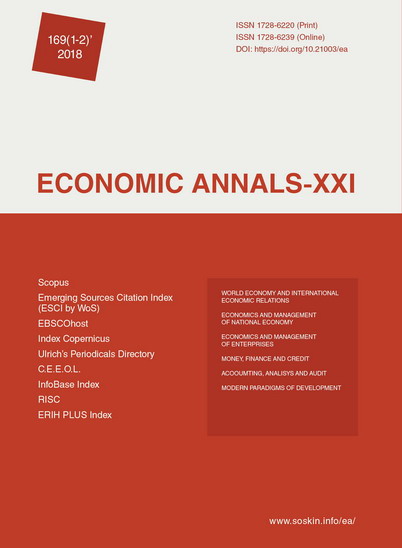 Summary/Abstract: The paper studies asymmetries in cyclical behaviour of the Ukrainian and Polish labour markets, accompanied by significant nonlinear fluctuations in economic activity and the unemployment rate due to economic instability, dramatic internal disturbances of social environment and strong external shocks. We investigate the labour market in Ukraine in comparison with the labour market in Poland, the country closest to Ukraine. The conducted econometric analysis shows that after a significant economic downturn, the recovery of the labour market recovers at a slower pace than the overall economic activity. The developed Markov switching autoregressive model implies distinctive regimes of the behaviour of the unemployment rate over time, which is associated with declining and rising modes. The changes in jobless recovery depend on the current and previous changes in real gross domestic product, which has a significant impact on the unemployment rate in both regimes. The estimated transition probabilities related to being in either of the regimes implies that the Ukrainian labour market exhibits the greatest probability of remaining in the increasing unemployment regime, as well as a relatively high probability of transition from low to high unemployment. On the contrary, the Polish unemployment rate is characterised by a high probability of being in a regime with low and declining unemployment, as well as a low probability of moving into an unfavourable situation, which reflects stability of its labour market. The opposite features attributed to the Ukrainian labour market, on the one hand, and the Polish labour market, on the other hand, cause significant labour migration from Ukraine to Poland. The high uncertainty in Ukraine is a motive to seek jobs overseas, especially for the young generation. The results of the investigation confirm the urgency and importance of immediate positive shifts and development of the Ukrainian labour market in order to preserve human capital and, taking into account the negative demographic trends, ageing of the population and significant labour migration, to prevent potential depletion of the labour force.