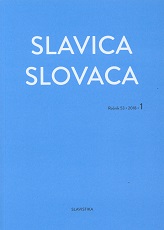 Summary/Abstract: The culture of laughter in every nation’s tradition, including Ukrainian, is characterized by its peculiarities. With its folklore roots, the comic of all kinds has been transformed into fiction. Such receptive relations are particularly close between folk oral tradition and the literature in the period of Romanticism. In this article, the authors are the first to analyse the interaction between categories of the comic and the tragic in featured short stories about Cossacks by O. Storozhenko. The research offers an attractive prospect for the further exploration of other O. Storozhenko’s works as well as for comparative studies of works by other authors’ in the indicated period.