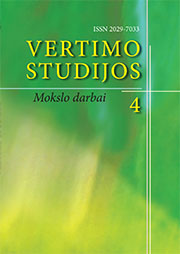 Summary/Abstract: Dubbing is both the most difficult and the most expensive type of film translation. The greatest challenge for dubbing actors is to retain the three-level—phonetic, semantic and dramatic—synchrony. Thus, the aim of the article is to put some light on the characteristic features of dubbed films, types of synchrony among them, and to analyse how these types work together in the dubbed film Up (2009). The close-ups where characters’ faces and lips are seen are the most relevant to the phonetic analysis, since it is important to find out if the number of syllables and lip and jaw movements of the actor speaking the source language can fit for the target utterance. To achieve greater semantic and phonetic synchrony various modifications are made on the semantic level, e.g. concretization, generalization, addition, and substitution. On the dramatic level, the correspondence between verbal and nonverbal information is important, the disclosure of characters’ features and rendering of specific accent. However, the main aim of dubbing is not the coherence of all types of synchrony but the attractiveness of the film, therefore some losses in synchrony may be justified if the dramatic effect is retained.