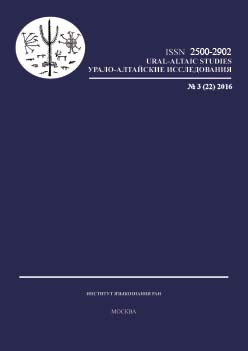 Summary/Abstract: The article shows the results of instrumental studies of the sound systems of indigenous minorities' languages of Siberia and adjacent regions. The presence of systems which are structured by the parameters of the larynx movement, as well as regularities of a developed pharyngeal harmony revealed in the Tuvan language, and also the obligatory pharyngealization of the Russian borrowings by the Tuvinians — all these factors serve to prove the important role of pharyngo-laryngeal part of a vocal tract for specifying Siberian peoples’ articulatory-acoustic bases (AAB) and phonological systems in their languages. With the Mongolian lagnuages being relatively close, the principles of a structural-taxonomical organization of the consonant systems of the Mongolian languages are, however, typologically different. A comprehensive analysis of instrumental data on the Tungus-Manchu phonetics through the example of the Evenki language shows that the specifics of the Evenki AAB is determined by a more forward localization of articulatory settings of consonants than in the majority of the surveyed Turkic and Mongolian languages of Siberia. The shifts of Khanty articulatory settings to the center of the oral part of the resonator cavity — meaning that the forelingual consonants’ push back, and, on the contrary, the guttural settings’ move forward — are similar to the previously identified processes in the segment of the vocal systems of the South Siberian Turkic languages, for which an Ugro-Samoyedic substrate is assumed. The reasons for discrepancies between phonic and phonological systems in the Turkic languages of southern Siberia are the heterogeneity of substrates, the different nature of turkization, the specifics of multi-temporal and multi-dimensional contacts of ethnic groups and the differences in their articulatory-acoustic bases.