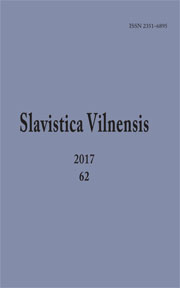 Четверть века спустя, или Как это будет по-русски? (К проблеме нормализации русского языка в Литовской Республике)
A Quarter-Century Later, or How does it Sound in Russian? (On the Problem of Normalizing the Russian Language in the Republic of Lithuania)

Summary/Abstract: The analysis of the Russian language of Lithuania’s media showed that the restoration of the independent state of Lithuania had increased divergences between the Russian language outside the nation and that of the metropolis. Cardinal sociopolitical transformations and changes in the societyʼs life and mentality caused numerous innovations in the language. Not all Russian nominations of the new Lithuanian realities appeared successful, a part of them being changed during the last decades. Lithuanian Russian needs the local standard of the language, and this standard must be developed and codified.