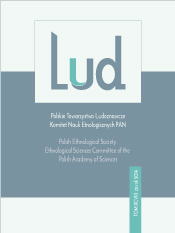 Choroba jako klątwa. Analiza i kontekst dyskursu medialnego dotyczącego tzw. genu kaszubskiego
Genetic Disease as a Curse: An Analysis and Contextualization of the Media Discourse on the “Kashubian Gene”

Summary/Abstract: The death of a six-month-old child from near Kartuzy in March 2008 started a discourse in the media. With no referral, the child had not even been admitted to the hospital. As it later turned out, the child had suffered from LCHAD deficiency, a rare metabolic disorder. Coincidentally, the tragedy occurred while, simultaneously, newborn genetic screening was being carried out in the Pomerania region showing that 37 children from Kashubia were afflicted with this disease. The media labelled this rare genetic disorder a “Kashubian gene” or (less often) a “Kashubian curse”. Between 2008 and 2016, over 30 articles addressing this disease were published in local and national newspapers as well as in online media. Discourse analysis into LCHAD deficiency shows the importance of language in which information concerning a disease or diseases is conveyed, specifically the choice of words, metaphors, and cultural references. As a result of media descriptions, this rare genetic disease has become an “ethnic disease”. This contributed to the creation of a negative stereotype of Kashubians as a closed group whose members suffer from a genetic disease and stick to outdated customs (endogamy). The discourse analysis also utilizes Michel Foucault’s conception of medicalization as a practice of power and his broader concept of power-knowledge. In his interpretation, power and knowledge are interconnected; medicalization processes of different domains of life constitute practices of power.