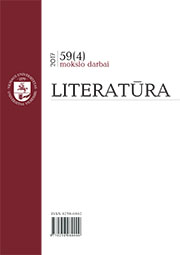 Summary/Abstract: The paper focuses on two novels – „Das Provisorium“ (2000) by the German writer Wolfgang Hilbig and „Vienos vasaros emigrantai“ (2003) by the Lithuanian writer Valdas Papievis – that were written after the political events which took place at the end of the 20th century (the Fall of the Iron Curtain, the Fall of the Berlin Wall and reunification of Germany and the Re-Establishment of the State of Lithuania) and, in a certain way, are a response to those events. One of the main objects that the comparative literary research, as an intercultural activity, analyses is the question of the self and the alien. In the novels discussed the alien shows its whole range from the everyday alien to the radical experience of the alien. Thus, in order to research these novels, it is not sufficient to regard the alien merely as the category of cultural alien. The paper is based on the literary hermeneutics concept developed by Andrea Leskoves by expanding the concept of the alien established by one of the greatest modern German philosophers, the phenomenologist Bernhard Waldenfels.