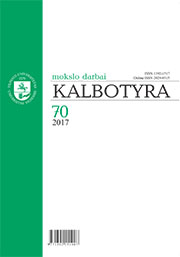 Summary/Abstract: In the recent decade the realisations of evidentiality and epistemic modality in European languages have received a great scholarly interest and resulted in important investigations concerning the relation between evidentiality and epistemic modality, their means of expression and meaning extensions in various types of discourse. The present paper deals with the adverbials akivaizdžiai ‘evidently’, aiškiai ‘clearly’, ryškiai ‘visibly, clearly’, matyt ‘apparently, evidently’ and regis ‘seemingly’, which derive from the source domain of perception, and the epistemic necessity adverbials tikriausiai/veikiausiai/greičiausiai ‘most probably’, būtinai ‘necessarily’ and neabejotinai ‘undoubtedly’. The aim of the paper is to explore the morphosyntactic properties of the adverbials when they are used as evidential or epistemic markers and compare the distribution of their evidential and epistemic functions in Lithuanian fiction, news and academic discourse. The data have been drawn from the Corpus of the Contemporary Lithuanian Language, the Corpus of Academic Lithuanian and the bidirectional translation corpus ParaCorpEN→LT→EN (Šolienė 2012, 2015). The quantitative findings reveal distributional differences of the adverbials under study across different types of discourse. Functional variation of the evidential perception-based adverbials is determined to a great extent by the degree of epistemic commitment, evidenced not only by intra-linguistic but also cross-linguistic data. The non-perception based adverbials tikriausiai/veikiausiai/greičiausiai ‘most probably’, būtinai ‘necessarily’ and neabejotinai ‘undoubtedly’ are the primary adverbial markers of epistemic necessity in Lithuanian, though some of them may have evidential meaning extensions. A parallel and comparable corpus-based analysis has once again proved to be a very efficient tool for diagnosing language-specific features and describing an inventory used to code language-specific evidential and epistemic meanings.