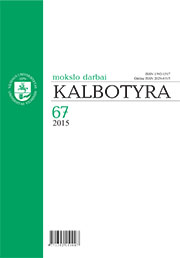 Summary/Abstract: The present paper deals with the multifunctionality of Lithuanian modal adverbials. The аim of the analysis is to show that the Lithuanian modal adverbials gal ‘perhaps’ and galbūt ‘maybe’ and their English correspondences are multifunctional and to retrieve their meaning variants. This contrastive corpus-based study makes use of quantitative and qualitative methods of research. The results show that the adverbials under study exhibit a variety of functions: though mostly they qualify the proposition in terms of the degree of likelihood, i. e. epistemic modality, they can also acquire several other functions in addition to qualifying the proposition. Though the adverbial gal ‘perhaps’ is more functionally versatile than galbūt ‘maybe’, it is clear that both adverbials have developed post-modal uses. The markers exhibit a diversity of functional variants in different types of discourse: they can act as mitigating devices reducing the illocutionary effect of an imperative or making a suggestion or offer more polite; as interrogative particles; or as approximators estimating a figure, number or quantity; or playing a part of non-factual markers in epistemic lists.