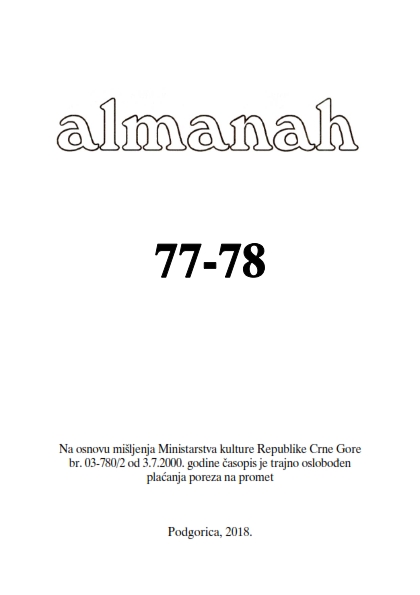 Vakufi hercegovačkih namjesnika i imućnih porodica i njihov značaj za urbani, ekonomski i kulturni razvoj Hercegovine u 16. stoljeću
Waqfs of Herzegovinian deputies and wealthy families and their importance for the urban, economic and cultural development of Herzegovina in the 16th century

Summary/Abstract: The paper deals with the problems of urban, economic and economic development of urban settlements in the area that included the Herzegovina sandžak in the 16th century. In several chapters, more precisely five of them, the author sought to present the earliest past, the genesis and specificity of the institution of the vakuf, and the phase of its affirmation and integration into the tissue of the Herzegovinian society in the 16th century. In this sense, the content of the paper is divided into chapters dedicated to the establishment of urban settlements such as Mostar and its surroundings, Čajniče and Pljevlja, which in this and later centuries, certainly in different historical contexts and social conditions, represented the most important economic , the cultural and economic centers of the Herzegovina Sandzak. In order to analyze this issue in a more concise form, the author gave equally important importance to the process of urbanization of settlements to the Herzegovinian governors, that is, to the highly-positioned representatives of the Ottoman administration, but also to the local wealthy families who established individual or collective waqfs to make a significant contribution to raising the level of urbanization of the mentioned settlements.

STROSSMAYEROVA POLITIKA PREMA BOSNI I HERCEGOVINI I BOSANSKOHERCEGOVAČKIM MUSLIMANIMA STROSSMAYER’S POLICY TOWARDS BOSNIA AND HERZEGOVINA AND THE BOSNIAN AND HERZEGOVINIAN MUSLIMS 2015 POLITIČKI I EKONOMSKO-PRAVNI POLOŽAJ BOŠNJAKA 1918-1929 POLITICAL AND ECONOMIC STATUS OF BOSNIAN MUSLIMS IN 1918-1929 2015 BOSANSKO PITANJE U DIPLOMATSKIM TOKOVIMA VELIKE ISTOČNE KRIZE (1875-1878) THE BOSNIAN QUESTION IN DIPLOMATIC FLOWS OF GREAT EASTERN CRISIS (1875-1878) 2015 Izgradnja željezničkog saobraćaja u Socijalističkoj Republici Bosni i Hercegovini The construction of the railway transport in the Socialistic Republic of Bosnia and Herzegovina (In the wake of an anniversary: 70 years from the construction of railway Brčko – Banovići) 2016 Adem Handžić i njegov naučni doprinos izučavanju institucije vakufa u Bosni i Hercegovini Adem Handzic and his scientific contribution to the study of the waqf institutions in Bosnia and Herzegovina 2016
2020 © CEEOL. ALL Rights Reserved. Privacy Policy | Terms & Conditions of use
ICB - InterConsult Bulgaria ver.1.5.1027