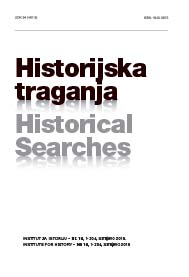 Summary/Abstract: As one of the most influential persons in Croatia during the 19th century, Strossmayer was in the political life of the Dual monarchy, both as a politician and as a bishop, the loudest advocator of Croatia’s struggle for independence. The thought on which his decades long political activity was based in many segments directly intruded into the political and religious relations within Bosnia and Herzegovina. If we take into consideration that Strossmayer considered that the Yugoslav program could be achieved exclusively by the expulsion of Turks from Europe, it is clear that his Yugoslav thought, which originated from Catholic hegemonism in the Balkans, did not as such treat Bosnian and Herzegovinian Muslims equally in the capacity of their ethnic individuality. On the other hand, the influence of Bishop Strossmayer was evident in his attitudes in which the issue of Bosnia and Herzegovina’s belonging was considered as a problem whose solution was a part of the Croatian national interest. The legal and political status of Bosnia and Herzegovina was the major preocupation of his political and diplomatic action from the second half of the 19th century. An especially important question, which certainly deserves more attention of historians, and which has been treated in the context of JosipJuraj Strossmayer’s policy towards Bosnia and Herzegovina in this paper, is the issue of representation of Muslims in Strossmayer’s political thought. The religious specificum of their identity as Bosniaks in his considerations, firstly through the idea of South Slavism and the Illyrian movement, and then within the Croatian national policy, was the subject of diverse interpretations. Due to the existence of national-romantic tendencies in history, that have deprived the explanation of this issue of its objectivity and scientific valorization, this problem should be treated with the ultimate goal of achieving scientific truth. In this sense, this paper represents and attempt to elucidate this question in historical science.

POLITIČKI I EKONOMSKO-PRAVNI POLOŽAJ BOŠNJAKA 1918-1929 POLITICAL AND ECONOMIC STATUS OF BOSNIAN MUSLIMS IN 1918-1929 2015 BOSANSKO PITANJE U DIPLOMATSKIM TOKOVIMA VELIKE ISTOČNE KRIZE (1875-1878) THE BOSNIAN QUESTION IN DIPLOMATIC FLOWS OF GREAT EASTERN CRISIS (1875-1878) 2015 Izgradnja željezničkog saobraćaja u Socijalističkoj Republici Bosni i Hercegovini The construction of the railway transport in the Socialistic Republic of Bosnia and Herzegovina (In the wake of an anniversary: 70 years from the construction of railway Brčko – Banovići) 2016 Adem Handžić i njegov naučni doprinos izučavanju institucije vakufa u Bosni i Hercegovini Adem Handzic and his scientific contribution to the study of the waqf institutions in Bosnia and Herzegovina 2016 Vakufi hercegovačkih namjesnika i imućnih porodica i njihov značaj za urbani, ekonomski i kulturni razvoj Hercegovine u 16. stoljeću Waqfs of Herzegovinian deputies and wealthy families and their importance for the urban, economic and cultural development of Herzegovina in the 16th century 2018
2020 © CEEOL. ALL Rights Reserved. Privacy Policy | Terms & Conditions of use
ICB - InterConsult Bulgaria ver.1.5.1027