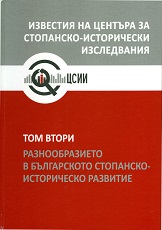 Summary/Abstract: The object of the research of the present article is the tracing out of the diversity in the spreading of the modern economic culture of the Bulgariannation in the epoch of the Bulgarian National Revival period (18th – 19th CC) – a diversity mainly in respect of geography and time. Both in Europe and on theBalkans the modern economic culture springs up and gives its first visible results at the beginning of the New Time. The Bulgarians are no exception to thatprocess, although it appears with them later in comparison with some of the peoples on the European continent. As with the nations on the Mediterranean andin Western Europe it is the trade among the Bulgarians which is the economic sphere to be the earliest and most notably affected by modernisation. That is why the article deals mainly with the modern trade culture of the Bulgarian National Revival period on the basis of which to a great extent appear and develop the other economic areas of the post-Renaissance society – the protoindustries and industry, services and credit. An attempt has been made to enlarge the research in that direction as well. The results of the research show that the highest degree in the spreading of the modern economic culture among the Bulgarian society was achieved during the third quarter of the 19th C (50ies – 70ies of the century) in the following centres and regions: among the Bulgarian community in the capital of the Ottoman empire – Istanbul, in the sub-Balkan settlements (Kalofer, Klisura, Sopot, Kazanlak, Koprivshtitsa and others), Central Northern Bulgaria (mainlyGabrovo and Turnovo), the Sliven-Kotel region (Sliven, Kotel, Zheravna, Gradets, Medven), the towns along the Danube (Rouse, Svishtov, Lom,Silistra,Toulcha), in some of the centres of the Bulgarian Diaspora in Wallachia, Moldova and Bessarabia (Bucharest, Krayova, Braila, Galatz, Giurgiu, Yash,Bolgrad, Focşani). Other regions are represented only partially on the map of the Bulgarian economic modernisation during the Bulgarian National Revival period with certain separate town centres: South Bulgaria (Stara Zagora and Plovdiv), South-Western Bulgaria (Samokov and Sofia), the north-eastern territories and the Black sea region (Varna, Shumen and Burgas) and there are certain regions which are missing completely from this map: North-Western Bulgaria,Macedonia, the south-eastern territories, a large part of Dobrudzha.