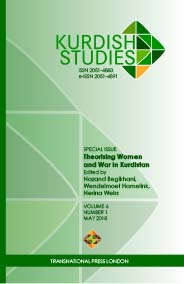 Summary/Abstract: In this introductory article to the special issue Women and War in Kurdistan, we connect our topic to feminist theory, to anthropological theory on war and conflict and their long-term consequences, and to theory on gender, nation and (visual) representation. We investigate Kurdish women’s victimisation and marginalisation, but also their resistance and agency as female combatants and women activists, their portrayal by media and scholars, and their self-representation. We offer herewith a critical perspective on militarisation, women’s liberation, and women’s experiences in times of war and peace. We also introduce the five articles in this issue and discuss how they contribute to the study of women and war in two main areas: the wide-reaching effects of war on women’s lives, and the gendered representation and images of war in Kurdistan.