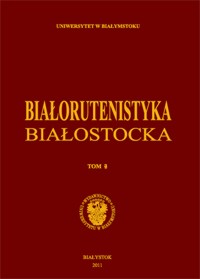 Summary/Abstract: Yakub Kolas’ poem “New Land” includes his reactions to the events that took place in Belarus when the author lived in Kursk province (until May 1921) and then returned to his homeland (May 1921). The poet deeply experienced foreign domination in the country and its division between Bolshevik Russia and Gentry Poland. Although those dramatic events did not become a central theme in the poem “New Land”, Yakub Kolas appears not just as a local patriot, but as a citizen of the potentially sovereign state – Belarus.