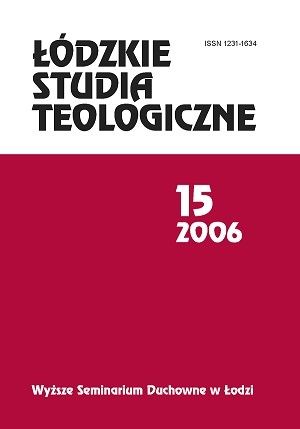 Summary/Abstract: In the article the author deals with the problem of the actual religious relation. The question that he wishes to answer is: Does the context of personal relations, the communitarian reality of the church, constitute the right milieu for establishing and experiencing the religious relation? This direction of the research is implied by the subtitle articulated in the form of a question: Is the Church necessary for salvation? The subtitle provocatively recalls a well-known axiom of the early Christianity Extra Ecclesiam salus nulla (St Cyprian, Origen). The author is convinced that, to all intents and purposes, nobody can evade the issue of eventual dependence, namely taking the religious relation seriously. The article consists of three points and some supplement – Intermezzo , which, pointing at the Hebrew experience, recalls the second, besides the Greek one, pillar of European culture. The question of religious relation, be clearly voiced or experienced non-reflectively, remains in every case closely linked with developing the sense of religion – this is the first remark. The specificity of Christianity is expressed by the fact that it provides an answer for the sense of religion, that is to the problem of belonging, of religious relation – this is the second observation. The third point will be to understand that the reality of the Church, which is religious sensu stricte and mystically continues the presence of Christ, constitutes a privileged place of and a means for solving the problem of religious relation. The Church itself is not a solution to political, social and economic problems although it provides their peculiar meta-solution. The foregoing standpoint is, with its intent, an opinion of a philosopher and not of a theologian.