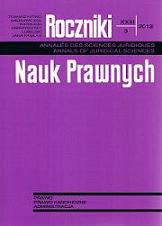 Summary/Abstract: The reviewer gets involved in a polemic with the authors of "The Economic and Professional Self-Government in the Political System of Poland" by Robert Kmieciak, Paweł Antkowiak, and Katarzyna Walkowiak. The editorial aspect of the work evokes a positive response, but the reviewer has doubts concerning the concepts presented by the authors, beliving that the publication gathers and repeats ideas that have previously been discussed in the literature of the subject. What is more, the book does not take into account the literature which critically evaluates professional self-government. The authors use a definition of economic self-government that is inadequate in the 21st century, and they suggest entrusting the operation of the Commercial Register to the Chamber of Commerce, a solution which the reviewer perceives as possibly anachronistic.