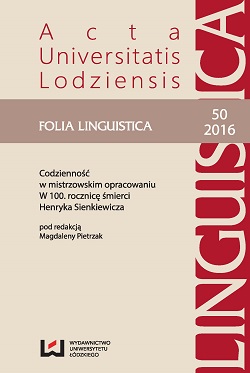 Summary/Abstract: The paper discusses the language exponents of emotions and evaluations in ournalistic creativity. The presented material is based on the reviews taking the form of a free column to essay printed in the years 1909–1948 in the writings devoted to a socio-political, scientific and literary life. They are integrated by a topic – a reference to the contemporary novel by Henryk Sienkiewicz titled Wiry (1910), and indirectly to the revolutionary events of 1905–1907. Among the authors of the reviews there are Polish literary historians, educators, literary critics, translators, social and political activists who not only inform about the book, interpret and evaluate its contents, but also want to shape the tastes and affect a socio-political attitude of their readers. The aim of this paper is the attempt to capture the characteristic for journalism language exponents of expression of feelings and value judgments in connection with its overarching function of exposing current facts, events, problems, from a certain point of view, with an intention to cause a specific reaction of readers. On the basis of the material analysis it can be stated that although the reviewers refer to presented phenomena in a subjective manner, they do not expose their self-sentient. If they express their feelings openly then: they hide under a fuzzy pronoun category ‛we’, mask a subjective attitude with impersonal form of the verb, describe their own idea of the feelings of others, talk about emotional states against the phenomena. An important role in the reviews is especially played by the emotionally charged vocabulary, which gives a positive or negative experience of the sender and at the same time is designed to elicit certain feelings of the recipient, for example contentment, fear, indignation. An emotional attitude of the authors to the discussed content is also revealed by the syntactic structure of interrogative and exclamation marks.