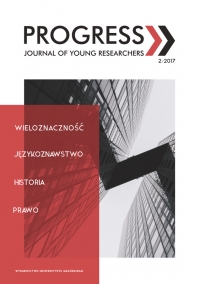 Summary/Abstract: The aim of the article is to interpret embodied experiences described in the book What I talk about when I talk about running by Haruki Murakami. The analytical frame for this task is the new philosophical and aesthetical movement called somaesthetics, invented by an American thinker Richard Shusterman. Not only the main assumptions of this conception, but also elements of its criticism are presented. Soamesethetics has met with strong response among philosophers, and gained both followers and opponents. Opinions of both sides are described in the article. The subject of this paper imposes its structure. In the first part, basic propositions and terms of somaesthetics are introduced. The second part is devoted to the work of H. Murakami and deeper interpretation of chosen excerpts. To familiarize the reader with content of the book selected quotations have been provided. The article ends with recapitulation of the main conclusions concerning the way Murakami’s work corresponds to Shusterman’s theory.