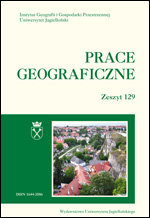 Summary/Abstract: Polish geographers have traditionally focused on research on large cities. However, in the 1990’s, their interests became influenced by Poland’s economic and political transformation. This process led to a break-down of past research methods and a renaissance of local studies, shifting from the macro-scale to that of small towns, while disregarding the meso-scale i.e. midsize towns. Such a lack of interest in midsize towns might result, on the one hand, from vague identification criteria used for this group of towns, and on the other hand, from the need to apply a wider methodological spectrum and a broader theoretical base for the research. The crucial problem is described by the following question: What role do midsize towns play in society and the economy? In other words, what is the relationship between towns in various size groups with their respective supply areas? Establishing the relationship between a town’s population and its functional structure enabled to determine the functional characteristics of midsize towns. The effect of a town’s surrounding area and its structural and functional background should also be considered. The paper analyzes these issues in light of municipal network models, dynamics of municipal systems, municipal development stages, and the theory of the economic base. Certain theories of regional development are also discussed