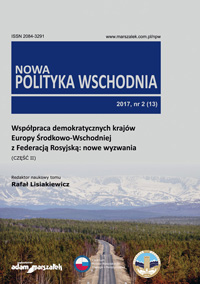 Summary/Abstract: A paper entitled Energy resources of post-soviet Central Asia: reserves, production, energy policy covers topics that refer to production and transport of the petrol and natural gas through the so called “Asian five” states. Turkmenistan, Kazakhstan and Uzbekistan are over-regional leaders in the production of petroleum and natural gas. New natural resources reserves has been also discovered in Tajikistan and Kirgizstan. The post-soviet states of Central Asia are making an effort to raise their shares in the global petrol market however their abilities are limited by the Russian Federation`s position in the global market, corruption and nepotism. Only the overcoming of this negative tendencies might lead to positive change of the perception, as the region countries will be perceived as a key players in the petroleum and natural gas export